From times immemorial, the Charyan people have regarded sex as one of the most important facets of life, public as well as private. It is ranked with food, literature and rank as an aspect of life no one can do without. Thus, any repression is very far from their minds, and Charyans simply can't understand why the foreigners in their cities behave so inexplicably in these matters.

Thus there is no sharp divide between brothels and mere wine-houses or restaurants. Being a whore, male or female, is not reprehensible, merely exhausting.

Sexual prowess is measured, not in inches, but in the pleasure one is able to give ones partner, and in the ability to poetically and musically describe ones experiences.

The Charyan people is not very fertile, neither men nor women. Several possible causes are an imbalanced diet that includes a rather large quantity of alcohol, frequent hot baths, but also the early start most people make having sex.

Most children will start experimenting with their friends and siblings well before puberty. On reaching puberty, which comes rather early to them, around their tenth year, things will get more serious. People in their early teens will experiment almost exclusively within their own age group, and their own sex. 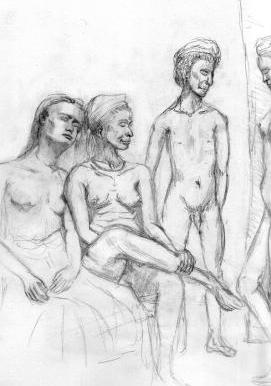 A few years later, around their twelfth, most will begin striking up relations with the other sex, although they won't probably go all the way until they are fourteen. At this stage, sexual education is seen as a serious subject, which should be provided according to the correct procedure and in the right order.

The most adventurous amongst these teenagers will find an adult who can teach them as much as possible, until they are sixteen to twenty, when they will probably marry.

Especially in the lower classes, the children band together in little groups, and the core members of that group often have a sexual relation, and will later on marry each other.

In contrast to all the surrounding peoples, where monogamous, monoandrous, polyandrous and polygamous marriages are the norm, but where it is always the case that one principal person is married to one or more others, the Charyan marriage ideally consists of three people, who are all married to each other.

Of course, marriages between two people are common too, and people often start out together, later marrying a third person, whom they both love. A marriage should be fruitful, and that excludes all fully homosexual marriages, even initially, so two people marrying must be of different sexes.

All parents are parents of all children, though when there are two women involved everyone knows who has carried the child, and she will be called naha'qosin, the carrying mother, as opposed to the naha'munir , the cuddling mother.

There are several theories about the origin of this marriage pattern. One possibility is that as cities grew larger it became correspondingly more difficult to survive for a nuclear family with children. When there's only one parent to earn the living, while the other cares for the children, money can easily become quite tight. Two adults should be able to earn enough to care for three adults and children.

Another possibility is that the reduced fertility of the Charyan people made it imperative to enlarge the probability of engendering offspring by introducing another person.

Of course, except for the truly rich, being alone is very rare, and if you start touching yourself in company, the company might well take it as an invitation to join the fun. But as you can't expect to be able to let your partner pleasure you if you don't know about what gives you pleasure yourself, a certain amount of experimentation is necessary to get to know your body.

Back to the contents